Heatherbrook was founded in 1910 by Thomas Henderson and son Sam Henderson. Heatherbrook was named by Sam because of his grandmother's great love for the Heather from the Highlands of Scotland, where she lived for many years before moving to North America.

Although Sam loved all classes of livestock from horses to peacocks, his love and enthusiasm for the Angus breed was foremost, showing at the Toronto Royal and Chicago International shows, with noted success. Selecting cattle from across Canada and the US, Grandpa Sam has been attributed to by the Canadian Angus History books as "From a study of thousands extended pedigrees covering more than forty years, it can be safely assumed that at least 75% of all Angus who stem from western Canada sources, will carry in their linage ancestors who were bred at or introduced to Canada by Heatherbrook Farms."

One can't help but marvel over the workload of the pioneers who opened this country. I recall somewhere along the line hearing that at its height, Heatherbrook had 400 cows (quite a feat in the pitch fork days). When I asked mom about it all she could say she remembered was that they hayed all summer and prayed for rain on Saturday nights. They always had at least 15 or 20 around the table at meal times, and grew up never knowing things could be any different.

Special mention of Uncle Don must be made. After carrying on the Heatherbrook tradition, we were rewarded with even more Heatherbrook cow families from his dispersal. Don still visits us from time to time helping me overcome my preconditioned ideas on how things should be done. His valued cowboy philosophies are given freely sometimes without even asking!

The trick is figuring out the good info from when he's pulling your leg.

Ben's interests and contributions were numerous from politics to fishing to all aspects of the livestock industry. An organizer and innovator Ben served on many boards, as well as an Ag Rep, Western Producer reporter (that's how he met mom) and 25 years Auctioneer at the Saskatoon Livestock Yards.

Dad was a builder, believing the fun was more in the journey then the destination. Respected by all for his many contributions to the industry, it over-shadowed the enormous impact he has left on the Angus breed.

Of the handful of top bulls to play a major role in North American Angus breeding programs, it is very safe to say Pine Drive Big Sky and Early Sunset 60E could be considered foundation sires right at the top. Ben purchased and promoted 60E long before he was successful being the 2 time American sire of the year. Subsequently, Ben raised the dam of Pine Drive Big Sky. Both bulls go back to a vast number of today's popular lines, making it hard to imagine the impact on the breed without the influence of these two breed founding sires.

Unbeknownst to Dad, Uncle Jock and Grandpa Sam purchased his first Angus cow Evening Tinge Heatherbrook 37U. I leased 37U's granddaughter Tinge Benlock 23'71 from Dad for a year to AI her to a special bull I'd scouted out of the US. Her resulting heifer calf won everywhere she was shown (Agribition, US junior national show in Omaha, Vancouver's PNE). More importantly, she went on to be the founding cow that all Evening Tinge's at Benlock trace back to today. 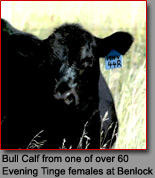